I’ve recently heard of a certain group in the U.S. who have received government funding and met proper zoning requirements to erect large a bronze statue on a corner lot in their town. The statue resembles the body of a man with a bull’s head and arms bent at a right angle with hands outstretched as if to hold something. The belly of the statue below the arms has an open pocket area at the top sort of like a kangaroo. The belly is stoked with flammable material and heated to a high temperature, so high that the entire statue glows intensely.

It seems that the people of the town have built the statue with the purpose of disposing of unwanted children. They bring their children, mostly babies, and set them on the arms of the white-hot figure until the bodies are burned up and fall into the belly of the statue. Somehow they seem to think that after doing this their lives will get subsequently better.

Of course the above account is fictional. Such a thing is grossly abhorrent, cruel, and unthinkable and you would have obviously heard about it if it were happening, right?

WRONG. Isn’t it interesting that if this were to happen as described above (just as the ancient Ammonites and surrounding cultures used to sacrifice to Molech) there would be a public outcry so loud and reported on by so many media outlets that it would be a lead story for weeks. After all, this is the United States not some primitive culture devoid of a conscience isn’t it?

YET WHERE IS THE MEDIA when Kermit Gosnell and Planned Parenthood offer services with the same outcomes through different techniques (only slightly less painful to the child)? You see, it’s the presentation – not the practice – that seems to get attention. Molten statues are sensational. Nondescript offices are boring, therefore, child disposal is boring; and besides, it tarnishes the pro-aborts’ well-crafted narrative that the real issue is “health care and ‘choice’ for women” not abominable child sacrifice to the god of self interest. 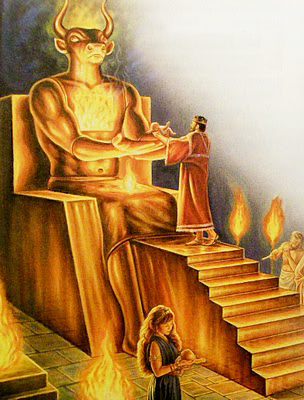 If you haven’t heard of Dr. Kermit Gosnell, you’re not alone. The media – the false prophets of this age (Jer. 6:14, Ezek. 13:10) – is pretending that he doesn’t exist, but if you can stomach descriptions of his hideous abortion practice go here.

Admittedly, I am having trouble praying for Kermit Gosnell. He deserves to be punished under the full extent of the law for what he’s done, but I know God has saved people who have done things just as or even more abhorrent (see King Mannasseh: 2Kings 21:10-18, 2Chron. 33:1-9 then 33:10-20).

And I’m having trouble praying for my country. I ask God for mercy on our country yet Ruth Graham’s remark from a few years ago rings true, “If God doesn’t punish America, He’ll have to apologize to Sodom and Gomorrah.”